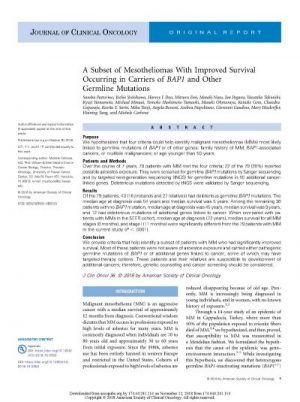 A recently published article authored by Drs. Michele Carbone, Haining Yang, and Harvey Pass (among others) is relevant to asbestos and talc defendants because it provides additional data supporting the conclusion that inherited genetic variations cause mesothelioma in some persons without any known exposure to asbestos. Most notably for asbestos and talc litigants, 57 out of the 79 mesothelioma cases had no self-reported asbestos exposure (see Table 1 for a summary of the characteristics of all individuals in the study).

This study focused on subjects meeting the following criteria to select individuals whose mesothelioma was likely attributable to inherited germline mutations: (1) developed mesothelioma under age 50; (2) multiple malignancies; or (3) family history of mesothelioma and other cancers. Targeted sequencing was performed for each of 79 mostly unrelated persons to identify genetic variants in 56 specific genes. The researchers recognized that many more genes (and other factors) could be relevant but limited their investigation for reasons explained in the paper.

Despite limiting their screen to a small fraction of the 22,000 known human genes, the study found that 55 of their 79 patients carried adverse, inherited variants (mutations). Thus, according to this study, inherited germline variants are indeed present in some non-asbestos-exposed individuals with mesothelioma.

The study also highlights that single gene testing is obsolete even though single gene testing sometimes could provide useful information. Specifically, the authors identified variants in 15 genes, including genes well known to have a role in mesothelioma (e.g. TP53, BAP1) and genes not previously associated with mesothelioma. Some subjects were also shown to harbor multiple germline mutations, again highlighting the importance of likely screening bias when testing for single or small numbers of genes.

For some years now, we’ve been making the point that the list of genes relevant to mesothelioma would expand well beyond BAP1. Anticipating new findings, ToxicoGenomica has monitored the medical literature on mesothelioma and developed comprehensive custom gene panel tests for mesotheliomas that can be used in litigation. We are pleased to report that our assays include all of the genes identified in this new study with the exception of one, which we will now add. Using different tiers of the custom assays, it is possible to scale the testing from small numbers of well characterized cancer driving genes up to thousands of known germline and somatic cancer-associated genes. Additionally, we can conduct whole genome sequencing to generate the data needed to reveal structural genetic changes that is often missed when screening a limited set of genes.

In sum, this study of 79 mostly unrelated mesothelioma patients provides further evidence that inherited gene mutations are indeed causing some mesotheliomas, especially (but not always) in persons who develop mesothelioma before age 50. The paper also provides further evidence that genetic testing is warranted in selected cases, and that multi-gene testing should be the preferred approach, preferably with whole genome sequencing.

ToxicoGenomica recently (October 29, 2018) conducted a free webinar describing the value of genetic testing in asbestos and talc cases. A recording of this webinar is available on our blog as are the presentation slides.

Download the presentation slides from our free webinar: "New Developments in Genetic Knowledge for Defendants in Asbestos Cases."