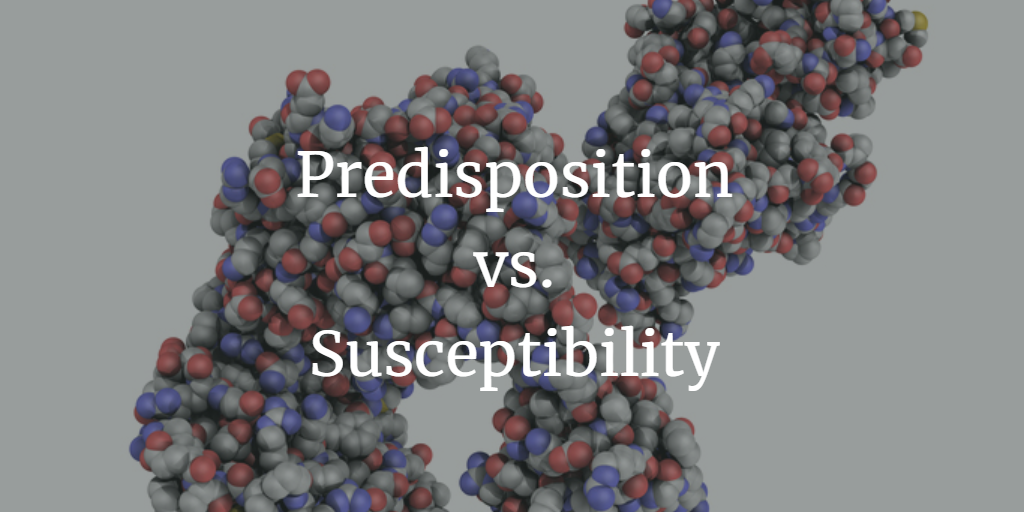 What is the Difference Between Predisposition and Susceptibility in a Toxic Tort Case?

As the application of genomic sciences becomes common in toxic tort litigation, savvy litigators are occasionally concerned about whether genomic information may backfire on the defense or the plaintiff. For example, defense lawyers may worry that plaintiff’s counsel may argue that an exposure to a minute amount of a toxicant caused an injury through an individual’s unique genetic pathway. This could be a valid concern under a very limited and certain set of circumstances, but in properly screened cases, knowledge of the plaintiff’s genetics may provide a clear-cut advantage for the defense.

To better understand the application of the science, one must understand the concepts of genetic predisposition and genetic susceptibility, including the crucial differences between these terms. Like any other complex genetically inherited trait (eye color or tolerance for lactose), disease predisposition and exposure susceptibility are determined by a combination of genetic factors, environmental, and lifestyle factors. In the following sections we further describe the meaning of these terms and demonstrate argument that may be made in toxic tort litigation.

Genetic predisposition refers to the likelihood that an individual will develop a specific disease (e.g., cancer, birth defect, autoimmune disease) due to the genetic makeup they have at birth. A genetic predisposition usually is inherited from the individual’s parents as gene variants that increase his or her likelihood of developing that disease independent of other environmental factors. There are germline mutations, which are present in every nucleated cell. Note, however, that it also is theoretically possible that a pertinent mutation occurred de novo during embryogenesis, perhaps during the first few cell replications. Depending on its timing, a de novo mutation could be present in nucleated cells with a frequency very close to the frequency of germline mutations.

An extreme example of genetic predisposition is cystic fibrosis. If an individual inherits specific genetic mutations from both parents, there is absolute certainty that these genetic factors will drive the development of the disease independent of any other factor (this is known as 100% “penetrance,” a concept that will be discussed in future posts). Not all genetic predispositions lead to the certain development of a disease. For example, a woman who inherits certain defective BRCA1 or BRCA2 gene variants has a very high (45 – 65%) probability of developing breast cancer compared to the 12% probability of women without these variants. According to the current scientific literature, no other genetic factor or toxicant exposure is necessary to drive the development of cancer if one of these gene variants is inherited.

As can be seen from these examples, demonstration of a genetic predisposition empowers the defense to confidently point to specific, objective genetic factors as a cause of an injury, independent of  “exposure” to an alleged toxin. It is important to note, however, that genetic predisposition is not always a guarantee of disease; not everyone with a defective BRCA1 or BRCA2 gene will develop cancer. However, an individual who carries a defective gene is more likely to develop cancer than someone who does not carry a defective gene. And with certain gene variants and certain combinations, the odds can rise close to the point of certainty. Genetic predisposition is a powerful tool for defense litigators because it provides well-developed, science-based models for alternative causation as to how a given cancer occurred independent of a “toxic exposure.”

“Genetic susceptibility” is a term that does not have a defined, objective meaning in peer reviewed scientific literature. In some instances, the term is used to refer to an increased likelihood of developing a phenotype. For example, individuals with genetically determined lighter skin tones often have genetics that leave them more at risk to the adverse effects of UV radiation, which in turn, lead to an increased sunburn response. Whether or not benzene causes adverse health effects is another example of genetic susceptibility. Specifically, certain individuals inherit specific genetic variants that increase the likelihood that benzene will cause a variety of adverse health effects (i.e., headache, dizziness, drowsiness, and loss of consciousness following lower, acute exposures and acute myeloid leukemia (AML), anemia, or other blood disorders at higher, chronic exposures). If an individual with a well-investigated genetic susceptibility to benzene were exposed to sufficient amounts of benzene, and if they do not have other offsetting mutations, they could have a higher likelihood of developing AML and related blood disorders than someone without the mutated alleles.

It is important to highlight that possible genetic susceptibility to a toxicant is the exception rather than the rule. In contrast to genetic susceptibility, most individuals actually have genetic resistance (i.e., the ability through protective measures or repair mechanisms to keep the body from being harmed by toxicants). Therefore, genetically determined responses to toxins are not limited to adverse outcomes (susceptibility). For example, some gene variants confer a neutral response (no allergy to gluten) and others can protect from the effects of exposure (HIV resistance).

As a genetically determined characteristic, an argument about genetic “susceptibility”  is one side of a coin that may potentially provide an advantage to a plaintiff in toxic tort litigation. However, the flip side can provide an advantage to defendants. That is, well defined genetically determined neutral or protective responses to alleged toxicants can provide powerful arguments supporting the defense case that the toxicant was not involved in the injury. In a recent case, ArrayXpress, Inc. was able to demonstrate that the plaintiff had gene variants that were protective against benzene toxicity. These facts served to effectively rebut the plaintiff expert’s unsupported speculation that benzene caused plaintiff’s AML. The case was resolved favorably for the defense.

Linking Injury to Predisposition or Susceptibility in the Courtroom

Toxic tort cases trying to make use of genetic evidence may hinge on whether the defense can obtain genetic data and the foundation to demonstrate genetic predisposition (i.e., the plaintiff’s genes caused the injury independent of their toxic exposure) or whether the plaintiff will provide the genetic data and foundation needed to demonstrate genetic susceptibility (i.e., the exposure increased the risk of the injury in the context of the plaintiff’s genes). The relationship between an individual’s genetic makeup and its outward manifestation – i.e., whether the genetic profile confers disease predisposition or susceptibility or both – is complex and can be influenced by multiple factors. On the one hand, some lawyers will argue that some aspects of some studies of some genetically engineered animal support the argument that there may be some people in a population who harbor some degree  of susceptibility to the carcinogenic effects of certain forms of asbestos. That generalized argument, however, fails to account for individual differences, which can and should be objectively scrutinized in a particular case. The argument also faces challenges based on the methods used in the underlying studies claimed to support the argument. On the other hand, notable numbers of mesothelioma cases among people with no documented asbestos exposure (often families with a history of related cancers), support genetic predisposition.

When confronted with defense arguments of genetic predisposition (i.e., plaintiff’s gene mutations were the sole or partial cause of a phenotype) plaintiff counsel may attempt to counter with susceptibility arguments. But, as described above, the “susceptibility” arguments a plaintiff may wish to argue face significant foundational challenges.  Accordingly, we have found that demonstrating genetic predisposition is an extremely powerful counter to this approach and whole genome sequencing can be used to generate the relevant data in individual cases. And, when there is no foundational data to support a claim of susceptibility, the case for predisposition becomes even stronger. Accordingly, outcomes may turn on whether a particular stakeholder is willing to actually spend the time and money needed to actually provide the pertinent, objective data.

At the end of the day, genomic techniques can be used to assess whether an individual has “predisposing” variants, potential “susceptibility” variants, or resistant variants and arguments in the courtroom will be guided by these genomic findings. Future posts will further detail specific examples of genetic predisposition/susceptibility and how additional external factors can interact to effect disease development.

Portions of this post were previously published in a previous article.

GET A FREE CONSULT!

To learn more about how you can implement genetic and a systems biology analysis in your case(s), please fill out the form, below.